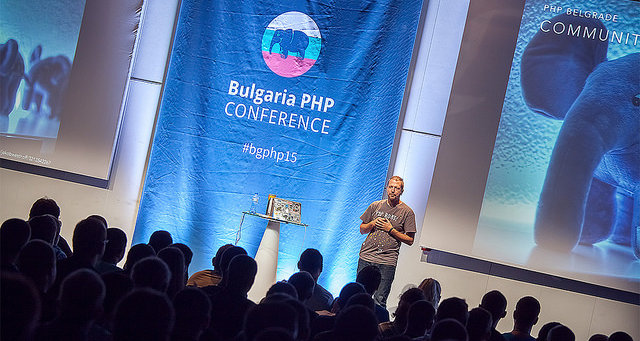 A week ago I attended the first Bulgaria PHP Conference that was organized on September 26th and 27th 2015 in Sofia. Even though it was the first PHP conference in Bulgaria, the event was a real success. The venue was spectacular, the atmosphere was laid-back but still enthusiastic and energetic and the speaker line-up was very impressive.

I presented a talk about AngularJS, yes a JavaScript talk even though it was a PHP conference. The organizers said that they wanted to have a diverse set of talks that includes something that you don’t come across at every PHP conference. AngularJS is the most popular JS framework at the moment, so many of us PHP developers get/have to work with it. There were also talks about topics such as testing, security, monitoring, graph databases, mentoring, data handling, API design and many others.

I could write a brief summary of all the talks I saw, or I could iterate over the things I learned, or tell you more about how well the conference was organized (but others have already done those). I thought instead that I would write about a topic that has been on my mind since the event. And that’s the PHP community.

Both local and global communities have formed around many different technologies. Communities where developers share experiences, ask questions and help each other. Especially around open source technologies, there are many communities where the important things are not money, fame or who is the best, but instead sharing, openness and helping others without expectations or hidden agendas. And at least from my own experiences I can say that it is great to be a part of the global PHP community. Even though many of the speakers are well-known from different conferences around the world, or from popular open source projects, or work for some of the worlds largest tech companies, the atmosphere is warm and relaxed and nobody seems to think that they are “above others”. 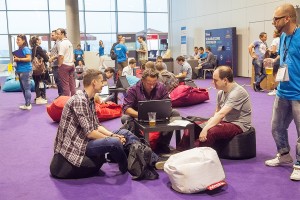 Everyone is willing to help others, and you could clearly see that in the so-called “hallway track” of the conference, which many thinks is one of the best things about attending conferences. It means for example that anybody can come and ask for help about testing from the creator of the most popular PHP testing framework. And he will sit down, take out his laptop and show you and teach you. Even though people are willing to pay money for his books and workshops, it doesn’t stop him (and others) from helping fellow developers during the conference, just for the joy of helping others and being a part of the community.

One of the most important and rewarding things about attending conferences is networking with other people. Nowadays the talks are often recorded and published online, so you can watch them for free later. But the conversations with other like-minded people and forming real life-long friendships are the best things that a conference can offer. This also makes it possible that helping others is not only limited to the hallway track at the conference venue, but people can later chat and ask questions online through various platforms, such as Twitter, IRC, forums etc. It’s great to know that if needed, you can ask for testing related advice from a testing expert, or about new version of PHP from the people who took part in building it, or some tips for handling large quantities of data from a developer that works with the analytics data of some of the world’s largest websites.

Helping others within the PHP community is not limited to only technical things. Recently the PHP community has for example collected money for the family of a PHP developer that passed away unexpectedly to cover funeral expenses and donated money to a rent deposit for a core PHP developer when his family was struggling financially and had to live in a trailer for a while. No one had to donate money but the community members just wanted to help “one of their own”.

Since many of us are working using open source tools, that have in many cases been developed by volunteers without any monetary compensation for their work, it is important that we take part and give back. It can mean participating in the development of these tools by for example fixing bugs or writing documentation, or mentoring other developers, or whatever you can help with. It can be rewarding even in it’s own right, but this way we can all take part in the global PHP community and be a part of something bigger than any one of us can be by ourselves or within the company we work for. And not limited only to the PHP community, but with all the open source communities we take part in.

PHP is definitely not the worlds best programming language from a technical view-point, but it is popular because it’s approachable to new developers, available in most hosting environments and well suited for web development. In addition to these, one of the biggest strengths of PHP in my opinion is the community around it. A community that I can proudly say I’m a part of.

Photos borrowed from BGPHP (with permission), go check out more at flickr.com/photos/bgphp